“Get Funked. You gotta try it.”  This was music to my ears when I walked into the brewery. It had been a fun drive to Mount Pleasant, and after fighting the traffic on Long Point road, I was ready for a little refreshment.

A flight of beer, including Hey Bruh, Tom Brady, and What the What started off the interview with John Kosky and Jim Lesner. I’ll admit it took me a little while to settle down and listen. I was distracted by the large beer menu and trying not to ask for tastes of Spanked, Aww Nuts, Yoga Pants, JoJo, and Ghost Beard. And that wasn’t even the full list! Talk about busy brewers. 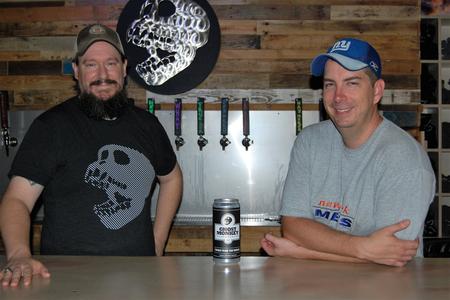 The brewery is truly a labor of love for these guys. “Unfortunately we all work for a living,  have kids, spouses, families, school events, stuff like that. Real life makes it interesting to run a brewery.” With just the 4 of them to do the paperwork, brewing, cleaning, and running the taproom it can get quite exhausting. But they are doing something they love to do, and the craft beer community appreciates it! I was lucky enough to be at Ghost Monkey opening day, and the crowd was incredible. By the time we left it was wall to wall people, and a line outside waiting to get in.

John, from New York, got involved in the brewery business in 2014. Along with Jim, and Josh Parker (all from South Carolina) they began the long process of forming Ghost Monkey.

“We wanted a laid back place where people can come and enjoy good beer. An easy ambiance, some 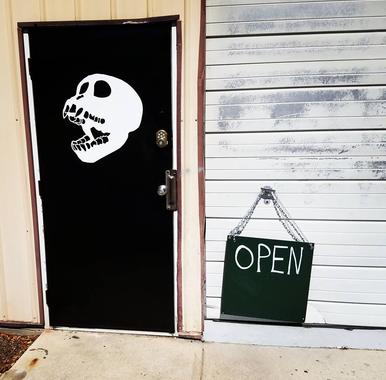 where you can call your friend up and say meet me here after work.”

So the search for a location began. They knew that a light industrial area would be a good choice, so they started looking in the West Ashley neighborhood. While they saw several properties that appealed to them, they noticed  Mount Pleasant at that time only had one

brewery. It looked to be an excellent market to add the diversity of a different brewery.

A building on Wando Lane suited their needs and construction began. As with most start up breweries, the sewer upgrades took the majority of the time.

With a 3 bbl brewhouse, 4 fermentors, a 7bbl bright tank, grain mill, and a ton of holding tanks all crammed into a small production area, the guys at the Monkey get the most out of their space. I was impressed by the scope of beers they had going at the same time.     “We always have recipes on our minds.” John told me. “People gravitate towards certain things, certain flavors. It can be seasonal or what is popular. IPA’s are the beer currently, so we find ourselves thinking how we can make our next IPA that much better. And we always keep our eye out for different ingredients.”

They usually have live music on the weekends, and rotating food trucks available to fill your stomach.

With plans for a full kitchen in the future, they hope to be able to cook and serve in house. “We would love a kitchen, but none of us want to run it. It’s something we have no experience in so we would have to find the right person to join our family to run it.”

They also plan on a canning line for distribution, and eventually want to grow to a  15 bbl system.

Fun events like Wine and Design and Girls Pint Out  are frequent visitors. 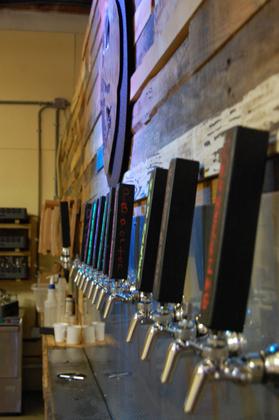 My flight of beers, and a couple others were gone, and it was time to chase the next brewery. When you find yourself in Mount Pleasant, do yourself a favor and stop by Ghost Monkey. You won’t regret it.

Also, read how the place was named. The story is on the wall to the left as soon as you walk in.