A pastor and a mechanic walk into a brewery. It sounds like the start of a cheesy joke, but is exactly what happened the morning of my visit to Rusty Bull Brewing. Located in the old Fox Music store on West Montague, I strolled in to talk to Brian and Ben about starting a brewery and making beer, laughing a lot in the process. I tried to retain a semi-professional demeaner, but with these guys you just want to relax and have a good time. 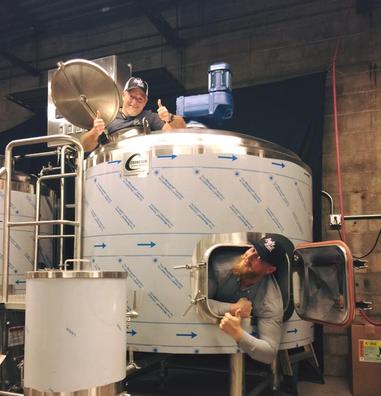 a pair of blue eyes and a quick smile, Ben Mayer starts my tour of the new brewery. Growing up in Alaska and Colorado, Ben’s home in Charleston is a lot warmer. Moving here in 2004 and becoming a pastor at Seacoast Church has kept him grounded in faith, and a part of the community.

Brian Bogstad grew up in Charleston, and while homebrewing, also pursued careers at Gerald’s Tires and Bishop Gadsen. While these jobs paid the bills, they were only stepping stones to running a brewery.

I asked how the idea to open a brewery got started. “We were just a couple of guys that smoked cigars and talked crap” Brian told me.  “We homebrewed and offered samples at weddings that Ben officiated. And then we got to thinking, what can we do with this?”

“So, we sat down and decided on a couple of principals. Brewing needs to come first, and to brew beers we enjoy. Without a passion for what we make, and  enjoyment out of what we produce, there is no reason to do it.”

We talked further about the realities of brewing and selling beer, and the fact that you have to make something that sells. “You have to pay attention to what the customer wants, to what the demand is” Ben said “but you have to stay true to what you brew, and be proud of what comes out of the tanks.” 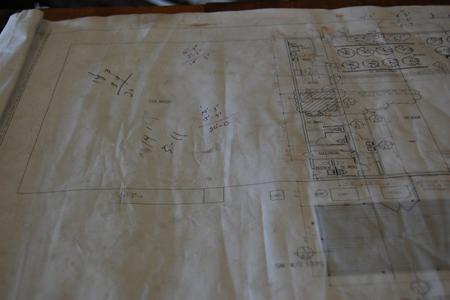 Rusty Bull beer will be powered by a 15 bbl brewhouse heated with steam. Four 15 bbl and four 30 bbl fermentors along with two 30 bbl bright tanks ensures that there will be plenty beer goodness for all to enjoy. Upgraded plumbing and electric with an eye toward future expansion allows for distribution possibilities, including canning.

“We chose North Charleston for our brewery because we wanted to  pay homage to the working man. Charleston is a working man’s town and is built around our industries. We want to win at home and want the hard working men and women that keep us going know they are appreciated. Come in after work, as you are. Kick back, relax, and have a beer. That’s the kind of place we want to be.”

Food trucks and live music will also be a part of the brewery. With the spacious floor plan you  will be able to enjoy the tunes without sitting on top of the band. I suggested a dance floor and a disco ball. Brian frowned but Ben looked thoughtful. 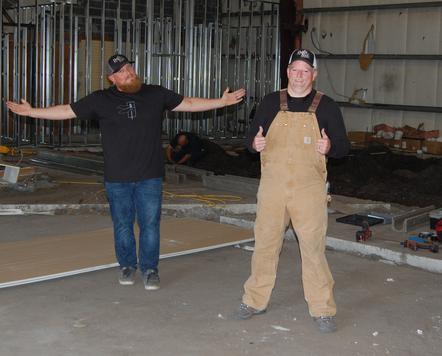 It was time for me to go and chase the next brewery. We said our goodbye’s and I walked out into the sunny Charleston afternoon. As I packed up, I kept thinking about what a good time I had. Brian and Ben have a unique friendship, and it guarantees laughter will be poured into every glass!