Just off of Folly Road, there will soon be a place to scratch two of your favorite itches at one place. In what used to be the King Street Grill location, Famulari’s Pizzaria and Brewpub will be opening, serving up hot slices and cold brews. The fact that it is on the way to Folly Beach, and also close to downtown Charleston, just makes it that much more of a mandatory stop. 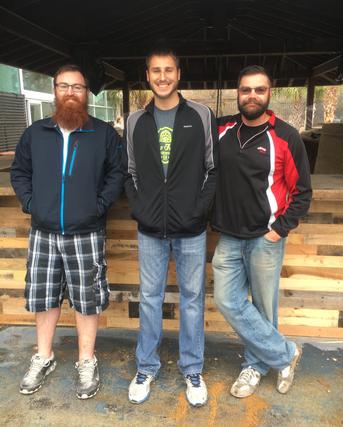 Colin Wingfield (seen on the right) decided early on in his food and beverage career that he wanted to be able to put his signature on something. Something that would have a positive impact on peoples’ happiness, and also be good for the community. His years working at Dog and Duck in Summerville and interacting with the local people strengthened this resolve. Add to this mix a vacant location on James Island, a bunch of great partners, and you are in business.

Justin Famulari, (seen in the middle, and yes of THAT Famulari fame) moved to Summerville in 2008. He, along with Jason Famulari, Josh Boissonnault, and Brandon Jensen, helped form Famulari’s Pizza. His long time friendship with Colin and his desire to brew beer made him a perfect partner to help start up a pizzeria and brewpub.

Famulari’s Pizza is a staple in the Charleston area, and has won Best Pizza in Summerville almost every year they have been open.

A.J. Escue (seen above on the far left) had worked with Colin in various restaurants for over 15 years, and was a natural choice to run the kitchen. With him in charge of the back of the house, Justin heading up the brewing, and Colin managing the front of the house, your chances of having an excellent visit are guaranteed. 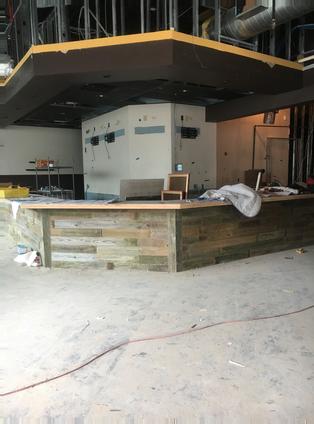 The brewpub has a large bar area and 20 plus taps being planned. Some of these will be reserved for local brewers, keeping them in touch with Charleston’s beer scene. You might not make it to the visiting taps though. Justin has an incredible line-up planned for opening. Lagers, Ambers, Stouts, and IPA’s will all be available in various forms.

“It’s important for us to be deemed worthy.” Colin told me. “By our friends, our neighborhood, and our peers. “Whether stopping by for a quick bite, or making an evening of it,we want everyone to enjoy the experience. Beer, or pizza, lunch or business meeting. We want you, to want to come and hang out.”

An added bonus to this location is a large outdoor bar with a full selection of taps, entertainment space and a stage area. Local art is being planned for the walls, and parking will never be a problem.